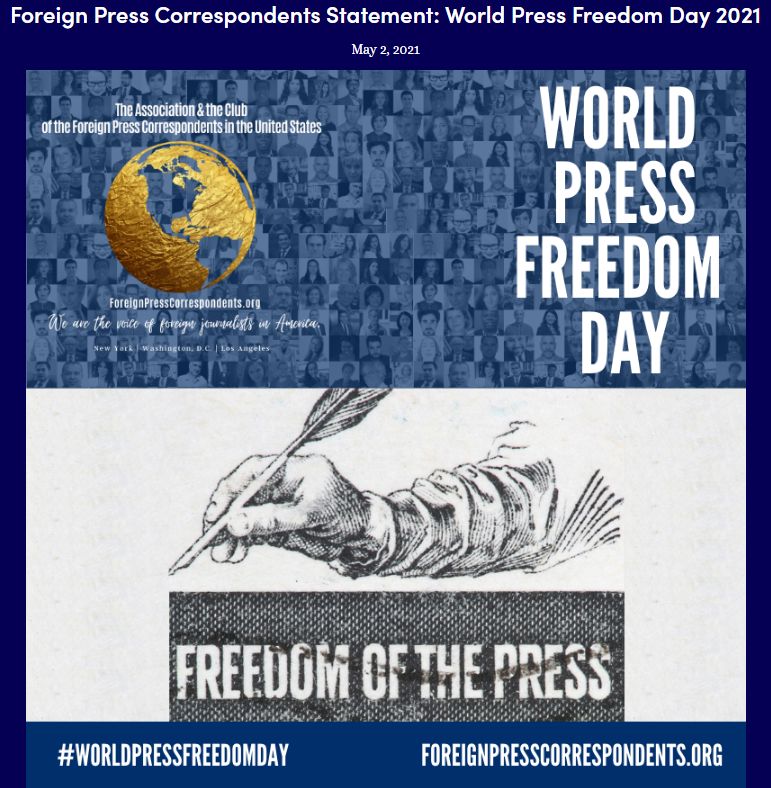 The Association & the Club of the Foreign Press Correspondent in the United States issued a statement: WORLD PRESS FREEDOM DAY 2021

“As we celebrate World Press Freedom Day this year, we are reminded of the crucial role that journalists play in informing society in tough times for humanity. While the world continues to endure a pandemic, the achievements of science give us each hope that this crisis will soon be resolved. Throughout the last year, the press has served the public by fact-checking and verifying information, especially when it comes to news that affects public health.

Press freedom reflects the need for journalists worldwide to execute their profession without fear, intimidation, or physical harm and with great respect for ethical standards. At the Association and Club of Foreign Press Correspondents, we strive to support foreign journalists in their work in the United States by ensuring they are encouraged to speak out against any attempts to curb or censor their reporting.

Press Freedom is not secure as long as journalists continue to be harassed, threatened, or killed. In this era of misinformation and disinformation, press freedom becomes more relevant than ever. If the press is silent, misinformation, disinformation, and deep fakes will dominate the public sphere, posing an existential threat to societies and democracies that flourish only with unfettered access to honest and fact-based information.”