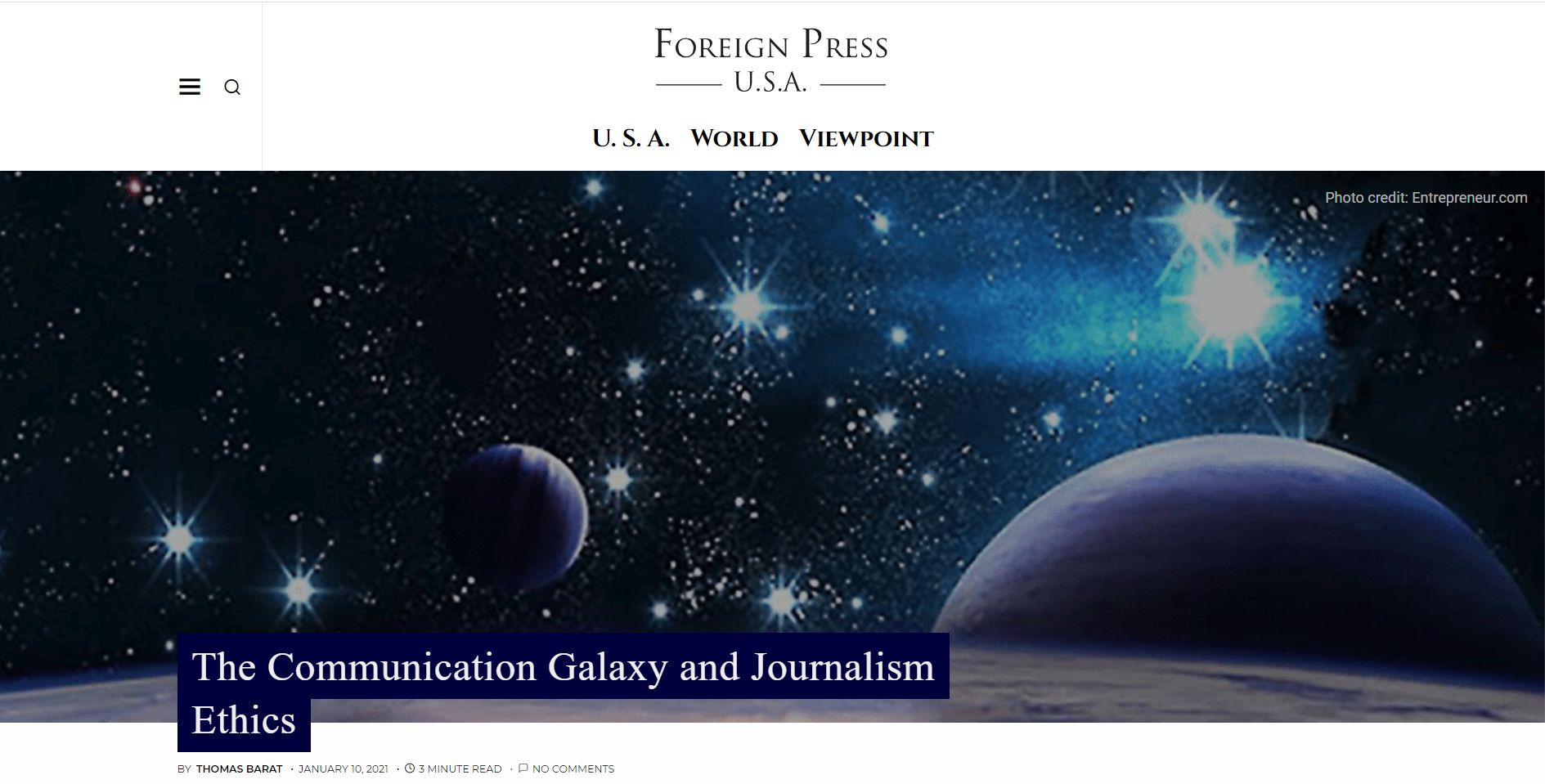 No Comments
The editor of eCCO Magazine would like to draw readers’ attention to the article published by the Foreign Press USA. , written by Thomas Barat, the Editor in Chief of the eCCO Magazine.

The Communication Galaxy and Journalism Ethics

Communication inventions have rapidly changed. With the invention of communication tools, our habits have also changed. For example, record player, cassette tapes, and Walkmans went out of fashion. CDs & DVDs are a thing of the past replaced by the MP4 file.

Today instead of sending each other faxes or even emails, we often communicate through social media.

Skype and Zoom have become mainstream.

Speaking at the 2007 Davos World Economic Forum, Bill Gates predicated that the Internet would revolutionize television within five years, due to an explosion of online video content and the merging of PCs and TV sets.

That prediction came sooner than we thought.

The speed of development is demonstrated by some facts:

Think about the invention of the telephone, the radio, cinema, and television. Over the past fifty years, the computer, information technology, and the Internet have all revolutionized.

One of the most revolutionary communication inventions in modern history has been the “Von Neumann architecture.” The computer design was first published by John von Neumann in 1945.

Before this invention, computers were usually built to carry out one kind of task. Von Neumann architecture is based on the stored-program computer concept, where instruction data and program data are stored in the same memory. This design is still used in most computers produced today. It is named after John von Neumann (originally named Janos Neumann,) the Hungarian-American mathematician, physicist, computer scientist, engineer, and polymath. Von Neumann’s genius was legendary even during his own lifetime.

During the Middle Ages, when illiteracy was widespread, the invention of writing and printing opened a new door to information sharing, however, this has changed.

For example, a new verb has been born: to google. If we are looking for something in the largest library/directory in the world, we “google it.”

It is almost unimaginable that there was a time when the speed of a mail pigeon or horse determined when a message arrived. Today it takes less than a minute to press “send”.

I recall a communication specialist back in 1991 say that while the 20th century was the age of the computer, the 21st century will be that of the phone.

With Mobile devices having come such a long way, from functioning as traditional phones to becoming the “general-purpose communication consoles,” it’s clear that prediction has rung true.

As far as the media is concerned, the relevance of the print press has been replaced by electronic media, which has given rise to what many call citizen journalism.

For this reason, the importance of professional journalism has increased. We need to set an example with our ethical practices.

The Responsibilities of Professional Journalists

The responsibility of a professional journalist is summarized in media ethics. For me, personally, the code of ethics is simple:

1. Ethical journalism is when a journalist does not lie, does not manipulate the environment, the audience.

2. Promise yourself that you are writing, saying, showing the truth, the whole truth, and nothing but the truth.

If the media person doesn’t tell the truth, journalists are guilty of what is called perjury and, if so, that person should be held accountable. Not only ethically but legally, as well.

We, professional journalists, cannot do fake news. We cannot be propagandists or marketing communicators. An ethical journalist cannot be an advertising or sponsor organizer.

As journalists, working in any genre on any medium— whether it being oral, written, digital or broadcast— we have the same responsibility; to be credible.

Our job is not to make the news, our task is to convey it. Our goal is to communicate ethically.

That is the responsibility of the professional journalists.

And one more note at the end: The story is not over yet!